#43 How Words Are Put Together 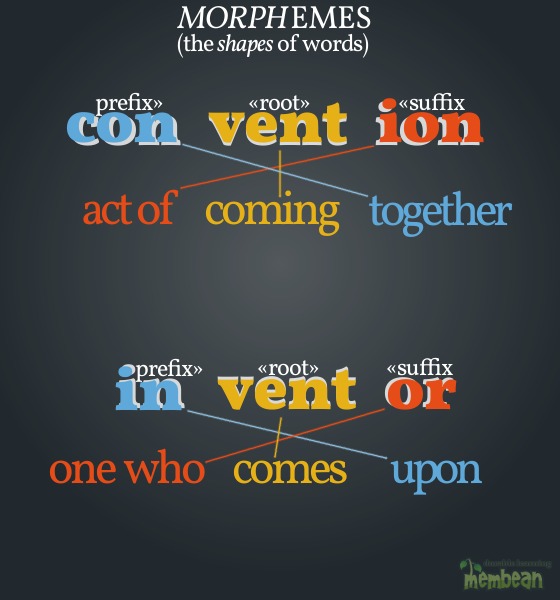 Morphology is the study of how words are put together by using morphemes, which include prefixes, roots, and suffixes. Parsing the different morphemes in a word reveals meaning and part of speech. For instance, the word “invention” includes the prefix in- + the root vent + the suffix -ion, from which is formed the noun “invention.”

Want to read it instead?

The word ingredient Memlet, shown below, is one of many ways that a word is taught in Membean.
See an example word page »

Conventional ways of thinking are those “relating to” how mainstream ideas have “come together” to form a generalized way of thought.

An incontrovertible fact is “not capable of being turned in the opposite” direction or “not handy in being turned against” itself; that is, it’s true beyond the shadow of a doubt.

The Fascinating Parts of Words

Morphology is the study of how words are put together or “shaped” by using morphemes, which include prefixes, roots, and suffixes. Knowing the different morphemes in a word allows one to not only figure out its definition, but also determine whether it’s a noun, verb, or adjective. The words morphology and morpheme both come from the Greek root word morph meaning “shape;” morphology is therefore the study of the “shape” words take, whereas morphemes are those building blocks which “shape” the word.

Morphemes include affixes, which are primarily prefixes and suffixes. Prefixes are those affixes which begin a word, adding meaning to the root to which they are attached. The root is the primary part of a word; it conveys most of the meaning of a word. Suffixes are those affixes which end words; they can add meaning, and usually determine the part of speech of a word, that is, whether the word is a noun, verb, adjective, or adverb.

One fun word with 9 morphemes includes 3 prefixes: anti-, dis-, and e-, 1 root stabl, and 5 suffixes: -ish, -ment, -ar, -ian, and -ism! Although “antidisestablishmentarianism” might seem like a difficult word, once you parse it by analyzing its different morphemes it’s cut right down to size, making it easier to swallow.

By figuring out the morphemes of words, they become transparent, their definitions easily remembered, and their parts of speech demystified.