If you are ambivalent about something, you are uncertain whether you like it or what you should do about it.

An assiduous person works hard to ensure that something is done properly and completely.

Someone who is capricious changes their mind repeatedly or behaves in unexpected ways; a capricious series of events follows no predictable pattern.

Something that is desultory is done in a way that is unplanned, disorganized, and without direction.

When you are diligent in completing a task, you work hard or tirelessly at it until it is complete.

When you create a diversion, you cause someone to turn aside momentarily from what they are doing by distracting them.

Someone who is impulsive tends to do things without thinking about them ahead of time; therefore, their actions can be unpredictable.

An industrious student puts a lot of energy and devotion into the hard work that he does.

Something that happens on an intermittent basis happens in irregular intervals, stopping and starting at unpredictable times.

An intransigent person is stubborn; thus, they refuse to change their ideas or behavior, often in a way that seems unreasonable.

A negligent person does not complete what they say they will do; they are careless and not attentive to their work.

An obstinate person refuses to change their mind, even when other people think they are being highly unreasonable.

Someone who is pertinacious is determined to continue doing something rather than giving up—even when it gets very difficult.

If someone has pluck, she or he has determination and courage.

When you procrastinate, you put off or delay doing something—usually because it is something unpleasant that you’d rather not do.

A propensity is a natural tendency towards a particular behavior.

If someone watches or listens to something with rapt attention, they are so involved with it that they do not notice anything else.

Something or someone that shows resilience is able to recover quickly and easily from unpleasant, difficult, and damaging situations or events.

Someone who is sedulous works hard and performs tasks very carefully and thoroughly, not stopping their work until it is completely accomplished.

To be tentative is to be hesitant or uncertain about something.

If you are unflagging while doing a task, you are untiring when working upon it and do not stop until it is finished.

A thing or person that is unremitting is persistent and enduring in what is being done.

When someone vacillates, they go back and forth about a choice or opinion, unable to make a firm decision.

The dog was tenacious in his persistent efforts to get all the meat off the bone. He tenaciously gnawed at it for hours, determined to get every scrap of meat he could. When his owner tried to pry the bone out of his mouth, he held on with fierce tenacity and dogged stubbornness. He only gave up his tenacious, unyielding hold on the bone when his owner offered him a ham sandwich in place of it.

Quiz: Try again! If you are tenacious, what are you?

Tenacious D The band "Tenacious D" was named as being tenacious for its continued insistence on being loud and vulgar in each and every show.

When one is tenacious, one is “inclined to hold” onto something until it is completed.

Tug of War This is one tenacious dog! 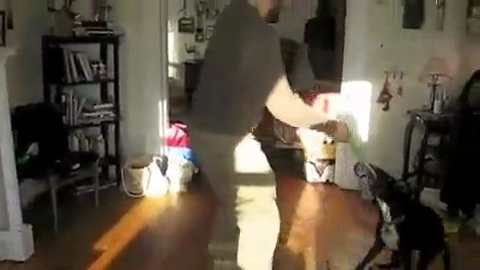 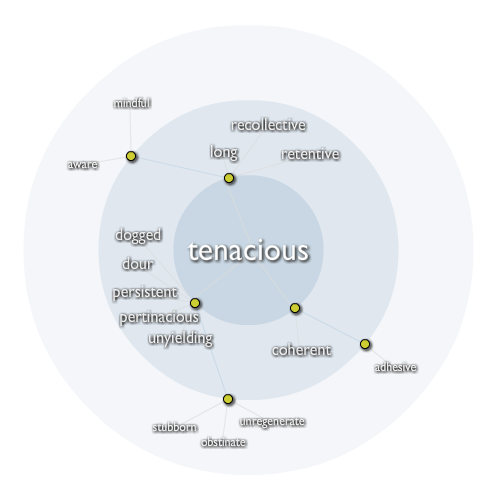