If you take an acerbic tone with someone, you are criticizing them in a clever but critical and mean way.

Someone who is arrogant thinks very highly of themselves; as a result, they can be overbearing, full of themselves, self-important, and act in a superior fashion towards others.

An autocratic person rules with complete power; consequently, they make decisions and give orders to people without asking them for their opinion or advice.

A captious person has a fondness for catching others at fault; hence, they are overly critical and raise unwarranted objections too often.

To cavil is to make unnecessary complaints about things that are unimportant.

If you commiserate with someone, you show them pity or sympathy because something bad or unpleasant has happened to them.

If you possess conceit, you have excessive self-pride—and thus think too highly of your own abilities.

When people condescend, they behave in ways that show that they are supposedly more important or intelligent than other people.

If someone deigns to do something, they agree to do it—but in a way that shows that they are lowering or humbling themselves to do so or that it is a very great favor.

You show disdain towards another person when you despise what they do, or you regard them as unworthy of your notice and attention.

When someone acts in a dismissive way towards you, he pays little attention to what you have to say since he thinks you are beneath him.

Someone who is egotistical thinks about or is concerned with no one else other than themselves.

Empathy is the ability to understand how people feel because you can imagine what it is to be like them.

If you flout a rule or custom, you deliberately refuse to conform to it.

Someone who is haughty thinks a lot about herself, and tends to be overly proud, stuck-up, and “high and mighty.”

Someone who is imperious behaves in a proud, overbearing, and highly confident manner that shows they expect to be obeyed without question.

If people patronize you, they talk or behave in a way that seems friendly; nevertheless, they also show that they think they are more intelligent or important than you are.

If you are pompous, you think that you are better than other people; therefore, you tend to show off and be highly egocentric.

When someone pontificates, they give their opinions in a heavy-handed way that shows they think they are always right.

If you are pretentious, you think you are really great in some way and let everyone know about it, despite the fact that it’s not the case at all.

If someone is sententious, they are terse or brief in writing and speech; they also often use proverbs to appear morally upright and wise.

If you are vainglorious, you are very proud of yourself and let other people know about it.

Lana was a supercilious or stuck-up young woman who believed that everyone should cater to her every wish. She behaved in a rude, proud, and supercilious fashion towards her companions by leaving restaurant checks for them alone to pay. Lana’s supercilious, self-centered, and superior airs annoyed so many that she soon was shunned by all of her acquaintances.

Quiz: Try again! What does it mean when someone is described as supercilious?

Superman's Silly for Us! When I said that I liked Superman, Janie raised her eyebrow in a supercilious way and said to all our friends that Superman is silly for us and walked away, making me feel silly and depressed by her supercilious way of making me look bad.

When someone is being supercilious in a conversation, he is raising his “eyebrow over” another in a superior attitude since he thinks he’s better than the person with whom he is conversing. 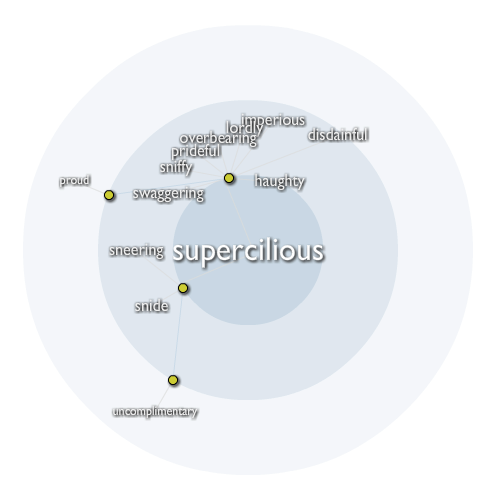