An acrid smell or taste is strong, unpleasant, and stings your nose or throat.

Someone is baleful if they are filled with bad intent, anger, or hatred towards another person.

Something beneficial is helpful, useful, or valuable in some way.

Something brackish is distasteful and unpleasant usually because something else is mixed in with it; brackish water, for instance, is a mixture of fresh and salt water and cannot be drunk.

A substance that is carcinogenic is known to cause cancer.

A comestible is something that can be eaten.

A contagion is a disease—or the transmission of that disease—that is easily spread from one person to another through touch or the air.

Something that has curative properties can be used for curing people’s illnesses.

A dank room or building is unpleasantly damp and chilly.

If you describe something, especially food and drink, as delectable, you mean that it is very pleasant, tasty, or attractive.

Something that is deleterious has a harmful effect.

Something detrimental causes damage, harm, or loss to someone or something.

When something impairs someone, it weakens, harms, or lessens them in some way.

An internecine conflict or quarrel takes place between people who belong to the same group, organization, country, etc.

A malignant thing or person, such as a tumor or criminal, is deadly or does great harm.

Something that is noxious is harmful, extremely unpleasant, and often poisonous.

A pathogen is an organism, such as a bacterium or virus, that causes disease.

If you have a pathological condition, you are extreme or unreasonable in something that you do.

A perilous situation is highly dangerous or extremely risky.

Something that is pernicious is very harmful or evil, often in a way that is hidden or not quickly noticed.

A pestilence is either an infectious disease that is deadly or an agent of some kind that is destructive or dangerous.

A putrid substance is decaying or rotting; therefore, it is also foul and stinking.

An environment or character can be sordid—the former dirty, the latter low or base in an immoral or greedy sort of way.

Therapeutic treatment is used to heal or treat patients who have a disease or other physical or emotional issue.

An unguent is a soothing salve.

A virulent disease is very dangerous and spreads very quickly.

The adjective wholesome can refer to something that is good for the health of your body and also for your moral health.

The trip to the spa had a salubrious or healthy effect on Mimi’s state of mind and body. Having never been to one before, Mimi was unprepared for the salubrious or beneficial effects of daily yoga practice, vegan meals, and intense meditation. Because of the good, wholesome, and salubrious influence of her experience, she’s decided to increase her practice of all things yoga to seven days per week.

Quiz: Try again! When is something salubrious?

Salmon Lube Us Every Day! For extra good health you should take a salubrious spoonful of salmon lube (fish oil) every day.

Anything salubrious has the “nature” of being “healthy or safe” for one. 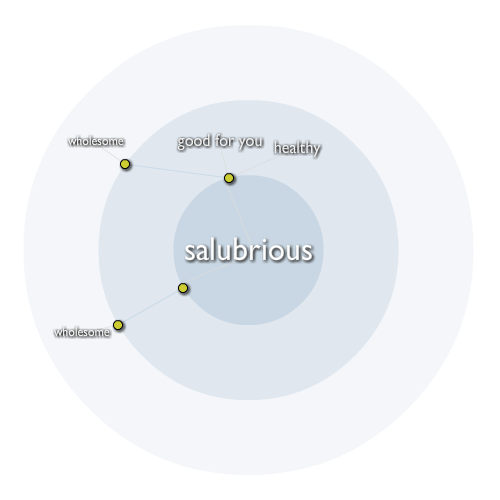