When something is adjacent to something else, it lies close to or neighbors it.

If you have an affiliation with a group or another person, you are officially involved or connected with them.

A confluence is a situation where two or more things meet or flow together at a single point or area; a confluence usually refers to two streams joining together.

Consanguinity is the state of being related to someone else by blood or having a similar close relationship to them.

Contiguous things are in contact with or near each other; contiguous events happen one right after the other without a break.

One thing that is incommensurate with another is different in its level, size, or quality from the second; this may lead to an unfair situation.

Something that is incongruous is strange when considered along with its group because it seems very different from the other things in its group.

Two irreconcilable opinions or points of view are so opposed to each other that it is not possible to accept both of them or reach a settlement between them.

The juxtaposition of two objects is the act of positioning them side by side so that the differences between them are more readily visible.

Liaison is the cooperation and exchange of information between people or organizations so that they can work well together.

The proximity of one thing to another is its closeness or nearness to it in either space or time.

If two people have established a good rapport, their connection is such that they have a good understanding of and can communicate well with one other.

Rapprochement is the development of greater understanding and friendliness between two countries or groups of people after a period of unfriendly relations.

A simulacrum is an image or representation of something that can be a true copy or may just have a vague similarity to it.

The propinquity of the two neighboring farmers explains why they have so much in common: living so closely to each other gives them ample opportunity to influence each other. The propinquity or closeness of their respective small farms sparked a new idea in both of them. They decided to capitalize on this propinquity or nearness of location by merging the harvest of their separate farms to meet the needs of higher paying organic produce buyers.

Quiz: Try again! What is propinquity?

Promise Pinkie in Proximity (Pinkie Swear) Two friends make a promise by putting their pinkies in propinquity, or proximity, to each other.

The propinquity of something is its “state or quality” of being “near” to another thing. 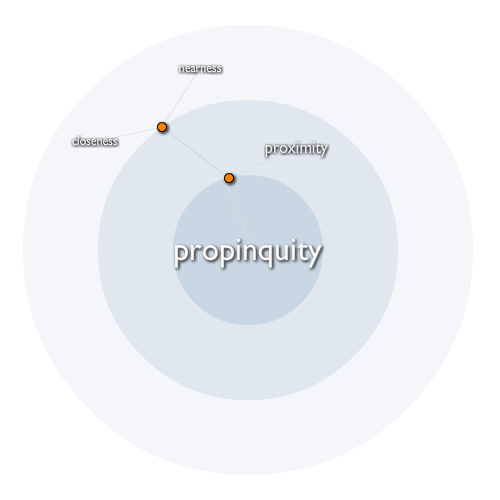