A behemoth is monstrously large in size or power, such as a gigantic whale or corporation; sometimes this word is given a negative implication in the sense that a behemoth is so large that it is difficult or impossible to manage.

A despot is a leader who has a lot of power and uses it in a cruel and unreasonable way.

When one person eclipses another’s achievements, they surpass or outshine that person in that endeavor.

Something gargantuan is extremely large.

An impregnable opinion or feeling is very difficult to change.

Inconsequential matters are unimportant or are of little to no significance.

An indomitable foe cannot be beaten.

Something that is ineluctable is impossible to avoid or escape, however much you try.

The adjective inexorable describes a process that is impossible to stop once it has begun.

Someone, such as a performer or athlete, is inimitable when they are so good or unique in their talent that it is unlikely anyone else can be their equal.

Someone or something that is invulnerable cannot be harmed in any way; hence, they or it is completely safe or secure.

A juggernaut is a very powerful force, organization, or group whose influence cannot be stopped; its strength and power can overwhelm or crush any competition or anything else that stands in its way.

A leviathan is something that is very large, powerful, difficult to control, and rather frightening.

If you have a nemesis, it is an opponent or rival whom you cannot beat or is a source of ruin that causes your downfall.

A plenipotentiary is someone who has full power to take action or make decisions on behalf of their government in a foreign country.

Something’s potency is how powerful or effective it is.

A potentate is a ruler who has great power over people.

If you describe someone as redoubtable, you have great respect for their power and strength; you may be afraid of them as well.

A stricture is a rule or condition that imposes restrictions or limits on what you can do.

If you surmount a problem or difficulty, you get the better of it by conquering or overcoming it.

Something trivial is of little value or is not important.

A thing or person that is unremitting is persistent and enduring in what is being done.

If you are unsurpassed in what you do, you are the best—period.

The zenith of something is its highest, most powerful, or most successful point.

Many religions believe in an omnipotent being that is all-powerful. This omnipotent being, often considered to be a god, has unlimited abilities. The belief system of Yoga states that yogis as well are capable of becoming omnipotent or godlike in their abilities, with the restriction of not being able to create worlds.

Quiz: Try again! What does it mean to be omnipotent?

Omnipotent Om The syllable om is said to be omnipotent or very potent because it represents the entire Universe.

One who is omnipotent is “all powerful.” 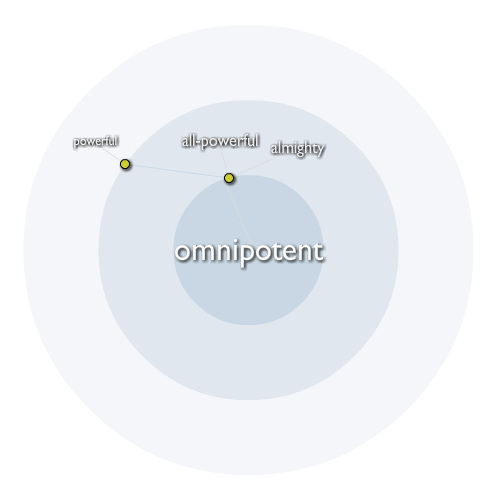