Iniquity is an immoral act, wickedness, or evil.

When someone has integrity, they do the right thing, no matter what; therefore, they are an honest and good person.

If you describe someone as Machiavellian, you disapprove of him because he uses clever tricks and other dishonest methods to achieve his aims, especially in politics.

A peccadillo is a slight or minor offense that can be overlooked.

A pogrom is an organized massacre or mass killing of a minority group.

The sanctity of something is its holiness or sacred quality.

Turpitude is the state of engaging in immoral or evil activities.

A vicious person is corrupt, violent, aggressive, and/or highly immoral.

Something vile is evil, very unpleasant, horrible, or extremely bad.

The sheer enormity or great evil of the conflict in Darfur is almost unimaginable: many hundreds of thousands have been brutally killed so far. The enormity and horrors of the crimes committed become clear when one visits the refugee camps, where one finds young children and women who have lost all hope. Many journalists who visit Darfur come back shocked and depressed because they are totally unprepared for the enormity or extreme moral offensiveness of the human tragedy they have witnessed.

Quiz: Try again! What is the enormity of a situation?

Enormous Pity One can feel enormous pity for the horrifying enormity of a catastrophe in which many thousands of people have pointlessly died.

Enormity is, at core, the “state or quality” of being “out of a pattern or standard” of acceptable conduct, thus going into an area that is beyond normal or acceptable “patterns” or “standards” of the way things should be. 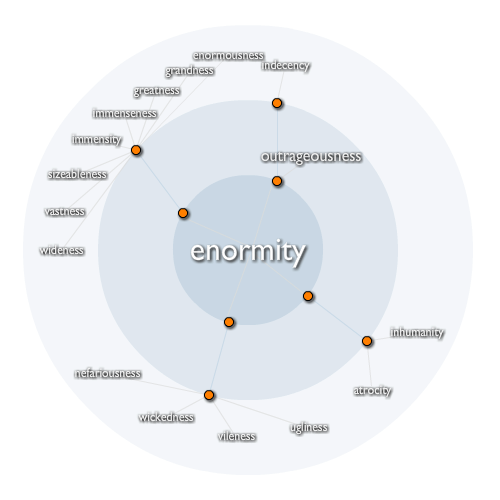