If something enthralls you, it makes you so interested and excited that you give it all your attention.

Someone who is jaded is bored with or weary of the world because they have had too much experience with it.

Something lackluster is dull, lifeless, and lacking in enthusiasm, energy, and passion.

A monotonous activity is so repetitious that it quickly becomes boring and dull.

If you have a penchant for some activity, you have a strong fondness for it and thus find it enjoyable.

A vibrant person is lively and full of energy in a way that is exciting and attractive.

Highly repetitive tasks such as filing papers for hours on end can often cause boredom and ennui to set in, causing physical and mental fatigue. Many students feel an unbearable ennui during long boring class lectures or when waiting in long lines with nothing to do. To avoid ennui, you may want to take a book along to read when you know you’ll have a long wait with a lack of interesting things to do.

Perennial Oui "Why do you always say "oui"? Why not say "yes"? You don't speak French! In fact, the only French word you know is "oui"! I think you say "oui" to make people think you know French! You perennially say "oui" every single stupid year ... why not switch languages, say, to Spanish? Why afflict me with your boring, perennial "oui," causing a great deal of ennui for me?"

From word roots meaning “in hatred.” The force of ennui has been considerably toned down over the centuries; one certainly, however, still does not “love” a situation filled with “ennui.” 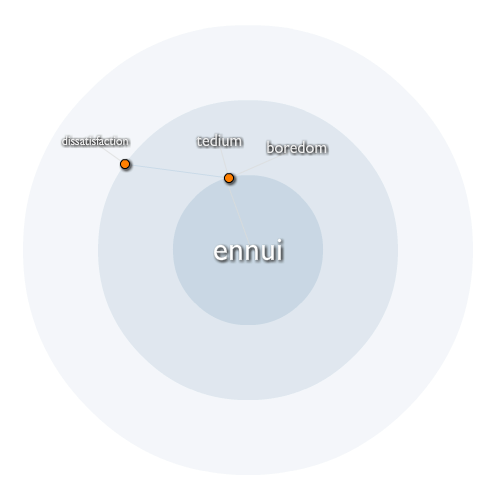